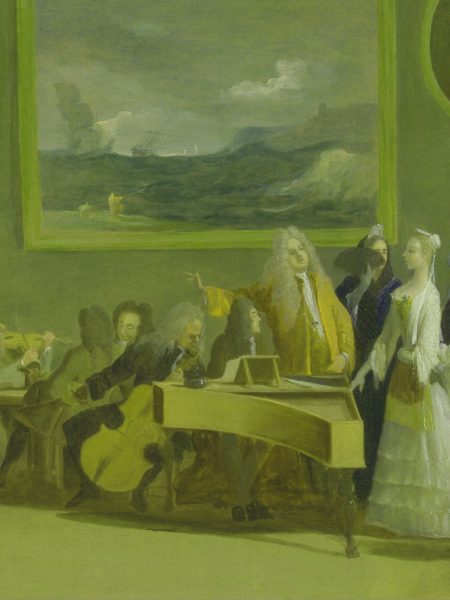 18th century London was probably the place to be for artists and performers looking for a wealthy patron. Thanks to its navy and a crescent colonial and industrial influence, England was becoming a leading power in European and global politics. The rising wealth of the British middle class created a vast market for leisure, such as theater plays, novels and most of all music entertainment.

Many Italians of the time, such as the composers Giovanni Bononcini, Nicola Porpora and Attilio Ariosti, were seeking fortune and fame in the sparkling Northern European metropolis, a fate still shared nowadays by many expats of the Bel Paese.

Not only composers, but also virtuosi, such as the singers Margherita de L’Épine (portrayed in Marco Ricci’s painting Rehearsal of an opera on the front cover of the booklet), were at the center of the London season of events and gossip.

Foreign composers, virtuoso instrumentalists and singers dominated the London scene, bringing with them part of their culture and craft which sometimes clashed with the British ideology and aesthetics. Several records of complaints about Italian extravagant manners and lack of sincerity testify this trend.

This cultural confrontation was mitigated by the common tropes of Greek and Roman mythology and literature, such as the Arcadian pantheon of shepherds, nymphs, satyrs and gods.

Britons and Italians alike were fascinated and fully immersed in a pastoral craze where tales of love, nature and simplicity in an idyllic land laid the foundation of a shared fantasy.  These stories cross fertilized together with Scottish and other insular folklore, anticipating somehow  the Romantic movement. A kind of ill omen, foreseeing the inevitable uprise of industry and science in the Age of Enlightenment.

A core instrument, eagerly practiced in the various British gentlemen’s clubs, is the flute, particularly the traverse or German flute. This woodwind instrument echoes the sound of pan flutes of Arcadian shepherds and satyrs, and its popularity can be proved by the many flute transcriptions of melodies in music collections and magazines.

Sketches of Arcadia wishes to revive some of those early 18th century forgotten cantatas and songs, all tied together by the shared fantasy of Arcadian literature. The appealing and controversial Italian manner inspired a generation of native English writers and composers, working together with artists coming from continental Europe.