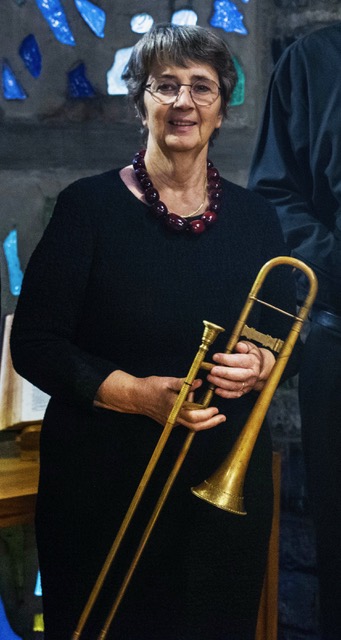 Catou Pecher was born in Antwerp in 1953. She studied medecine at the Vrije Universiteit Brussen (VUB).
She discovered early music in the early 70’s and played different instruments as recorder, shawm, crumhorns and medieval fiddle.
During summer courses in the 70’s in Germany (Celle) and Belgium (Marche-les-Dames) she started to play the sackbut and the viola da gamba. She learned the viola da gamba with Adelheid Glatt in the 70’s.

She played the barok violin in the orchestra of the « Chapelle des Minimes » from 1985 to 2015. She took lessons in sackbut playing with Wim Becu at the Academy of Woluwe St.Lambert from 2004 to 2013 and in barok violin playing with Stephanie de Failly during the same period. She attended numerous summer courses directed by Wim Becu and Adam Woolf, in Belgium and Spain.