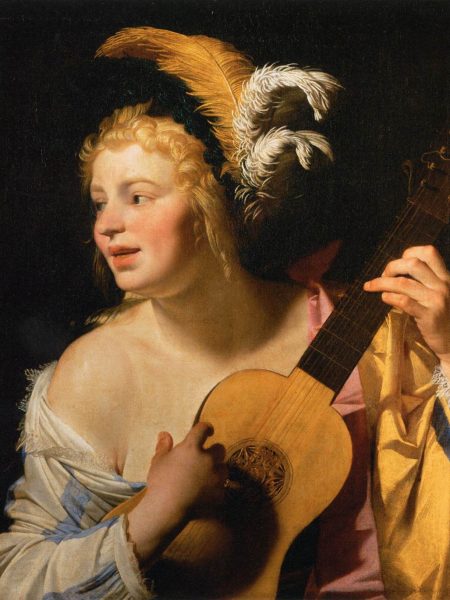 Woman Playing the Guitar by Gerrit van Honthorst  (Department of Paintings of the Louvre, Paris)

In the last decades researchers have been trying to integrate Jazz and other more recent forms of Popular Music in the Classical curriculum, especially concerning Music Theory and Improvisation. The divide between Classical and Jazz idioms, and in general art and popular music, is mainly philosophical: for the first one sound is a projection of the composer’s artistic view, while in the latter the performance is part of a broader socio-cultural collective process. This might be the reason why musicians trained in one idiom encounter problems understanding the other.

During the last decades, we have experienced a general tendency to value the compositions of popular music artists of the past, going beyond the rigid canon we inherited from the Romantic period. Thanks to recent research the horizons of both professionals and public have expanded to include music outside the dominant culture, such as the one composed by women artists. Nowadays we have a better understanding of the rich variety of musical styles within different social classes and cultures. Substantial research and pedagogical effort has been spent to reconstruct the lost improvisational component of
Western Music.

The music of the Mannerist period (c.1520 – c.1650), subject of this dissertation, presents stylistic as well as historical similarities with the Jazz culture of the first half of the 20th century. This period of transition, from Medieval Modality to a mature theory of Tonality during the Enlightenment, is a vivid artistic laboratory, where composers experiment and spread ideas through the new medium of printed music. The Italians have led the Western music culture during these sensational two centuries, with a style characterized by virtuosity of performers, improvisation, drama and rhythm.

My choice of the Italian Mannerism as a case study is due to my personal interests as researcher, artistic director and musician. The aim is to introduce popular repertoire in low and high Classical music education (Larson, 2019), so that we can fill the performative and aesthetic gap with the Pop and Jazz practices. Furthermore this interesting repertoire could function as a bridge between Classical and Jazz music theories and practices, at artistic as well as pedagogical level. I believe it would be fruitful to first learn from popular music of a given period before appreciating the masterworks of their contemporary art music. We should not forget that geniuses like Beethoven or Bill Evans, to cite some, were aware of the popular music of their time and their contribution was mainly to find wonderful variations and combinations of the popular musical patterns of their time.