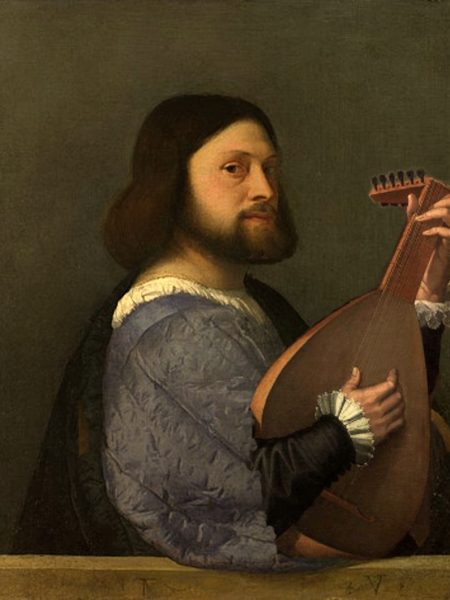 A Man with a Quilted Sleeve by Titian, 1510 and Portrait of a Man Playing a Lute by Passerotti 1576 (National Gallery of London  en Museum of Fine Arts Boston)

The history of humanity is often divided in epochs, well defined by events and characters with their own dates, names and specific places.
The big changes in human thought are the work of genius minds that have suddenly revolutionized their surrounding culture, as if they were a deux ex machina coming for the last scene of a drama. The passing on of the baton from the tradition of the ancients to the one of the moderns is considered to be on a par with a thermodynamic phase transition: suddenly all the water molecules change from liquid to gas as soon as the critic temperature has been reached, as if they were directed by an invisible orchestral director.

Likewise we have been told that the passage from the musical period of the Renaissance to the Baroque was due to the works of great composers like Claudio Monteverdi and theoreticians like Vincenzo Galilei, ignoring all the tonalities of shades between the so called polyphonic and monodic styles.

One of the missing links in the stylistical evolution of the 16th century is the so-called arioso madrigal. The name itself presents a paradox: how can a madrigal, that is a representation in music of secular poetry in polyphonic style, bear traits of an aria, associated with solistic singing? The term aria is much older than we often think. It was used to define melodic and harmonic patterns, upon which minstrels and balladeers sang improvised poetry or excerpts of the literary canon.

The arioso madrigals formed a bridge between the popular musical tradition in Italy and the polyphonic style introduced by the oltremontani. The genre paved the way for the artistic reforms of the Baroque period.

Recent studies have shown how the tradition of the ottava rima poetry was used in that new madrigal genre. The undisputed star was the Orlando Furioso by Ludovico Ariosto: up to 666 madrigals were composed upon its verses in the century that followed the second final edition of the book in 1532.

The stories about voyages, exotic places and romances between knights and ladies might well be considered the pillars of modern literature: legends of medieval times were mixed with the values of a new world, characterized by big discoveries and changes. The characters in Ariosto’s poem have inspired artists up until present.

In our concert program Madrigali Ariosi we recount the love affairs of the many characters in the Orlando Furioso, through various compositions of this particular musical genre.